The archeological site of Philippi is located in a plain between the mountain range of Orvilos in the north, Mt. Paggaion in the southwest and Mt. Symbolon in the east. This fertile plain was covered with swamps in antiquity that gradually dried up. The history of the site begins in 360 BC, when settlers from Thasos founded the city of Krenides, which received its name from the many springs in the area. The location of the city was strategic, as it controlled the narrow passage between the mountains and the swamps, leading from the port of Neapolis (Kavala) to the interior of Thrace. In addition, its inhabitants could take advantage of the agricultural opportunities afforded by the plain, the abundant timber of the mountains, and especially the rich gold and silver deposits of the area.

But the life of Krenides as an autonomous city was very short. Just four years after its foundation, its inhabitants were forced to seek the aid of the Macedonian king Philip II as a result of threats from local Thracian tribes. Philip used the invitation to expand his kingdom to Thrace and to take control of the mines in the area. In 356 BC, he occupied the city and settled colonists in it, from whom the city received its new name: Philippi (the colonists of Philip). Not much is known about the city of this time, since its great prosperity during the Roman period almost obliterated the traces of the older phases. Apart from parts of the theater and a small temple-Heroon, which date to the late Classical period, the most important archaeological remains of the city of Philip are the walls with which the king fortified the settlement which surrounded the citadel, the southern slope of the citadel, and a part of the plain, which was offered for habitation and development of public spaces.

The next significant period in the history of Philippi was the great battle fought in 42 BC outside the city, between the Roman armies of Brutus and Cassius on the one hand, and Antony and Octavian on the other. The first two were the leaders of the conspiracy that led to the assassination of Julius Caesar in 44 BC, defending Roman democracy. Despite the dictator’s assassination, however, the conspirators were unable to impose democracy on Rome; instead, civil war ensued. Brutus and Cassius fled to the east, while Caesar’s supporters, Antony and Octavian, after suppressing all resistance from the Roman senate, turned against the conspirators. In the battle on the outskirts of Philippi, Antony and Octavian won, marking the Roman state’s move towards Octavian’s monarchy (which was sealed almost ten years later by the latter’s victory over Antony in his naval battle of Actium).

After the battle of Philippi, the victors settled Roman veterans from the legions that had taken part in the battle in the city. The territory of the city was divided into lots among Roman and Italian settlers, while other smaller neighboring cities lost their autonomy and ceded their territory to the new colony. In the city itself, although no changes were made to its territory or its design (the Roman city remained relatively small, within the walls founded by Philip II in the 4th century BC), many construction projects were carried out that made Philippi a luxurious urban center of the east. The Via Egnatia that was built in the 2nd century BC by the Romans on the site of the Macedonian royal road, passed through the city (Decumanus maximus). Next to this main street was established the new agora of the city (forum) according to Roman standards: around the central square buildings of administrative or religious character such as the Curia, the temple of imperial worship, the archive, the library, the bema for the orators, and others were constructed, and south of these the commercial market (macellum) and the palaestra were built. The old theater was renovated and the city also contained public baths. The baths and fountains were supplied with water brought to the city by an aqueduct that was built during this period.

The Roman colony of Philippi and its port, Neapolis, developed into an important urban center in the eastern Mediterranean. The co-existence of Greeks, Romans, and Thracians, and the connection of the city through the Via Egnatia and its port with the rest of the world created in Philippi a cosmopolitan character which is best reflected in the religious beliefs and practices that abounded in this city during this period. Local deities, such as Artemis, were worshiped alongside Roman (Silvanus) and Egyptian. In addition, there was a Jewish community and a synagogue in the city.

This multicultural city was chosen by the Apostle Paul as the first stop on his journey to Greece in 49 AD. Departing from the Troad and with a stopover in Samothrace, he reached Neapolis and Philippi, where he founded the first Christian community in Europe. Paul maintained close contacts with the Christian community in the city, as is evident from his letter to the Philippians and from his two later visits to the city. The first Christian house of worship at Philippi was dedicated to Paul, which was later replaced by a large octagonal temple. In addition to the octagonal temple, in the early Christian years many churches were built in the city, the architecture and luxury of which competed with elite buildings in Thessaloniki or the capital, Constantinople. This is the case, for example, with the so-called Basilica B, whose design and decoration show a strong affinity with the churches of St. Irene and St. Sophia in Constantinople.

After the end of the 6th century AD the city began to decline. No new buildings were constructed and it appears that the city did not have the financial means to renovate the old ones. In addition, Slavic invasions forced the population to move to the mountains or to larger cities. After the 7th century, the city lost its importance as a religious, administrative, and economic center and in Byzantine times survived only as a fortress. The city was completely deserted soon after the Ottoman conquest of the 14th century and was gradually transformed into a ruin.

The main factors of deterioration of the monuments of this archeological site are the microclimate of the area, which is characterized by intense humidity, frosts, and fluctuations in temperature, extreme weather phenomena (floods, snowfalls), and vegetation, which grows rapidly in the wet plain of Philippi. These phenomena disrupt the cohesion of the marble masonry and weaken the strength of the mortars of the buildings. In addition to the monuments, the high humidity in the area due to the presence of swamps that existed in the plain of Philippi, must have been troublesome for the ancient inhabitants of the city.

Archaeological Site of Delos
Delos is perhaps the only island in the Mediterranean which, despite its very small size (3.4 km2), was very important in antiquity. It was a leading […]

Archaeological Site of Delphi
The archeological site of Delphi was a sanctuary of Apollo and the most important oracle of the ancient Greek world. According to ancient tradition, the god […]

Archaeological Site of Mystras
The archeological site of Mystras is located about five kilometers west of Sparta, at the foot of Mt. Taygetos. The history of the site begins after […]

Archaeological Site of Olympia
Ancient Olympia was one of the most famous pan-Hellenic sanctuaries and the seat of the most important games of ancient Greece. Throughout its history, it was […]

The sanctuary of Epidaurus is located on a plain in the Argolid peninsula.

The temple of Apollo Epicurius is located at an altitude of 1131 meters above sea level,

The archeological site of Philippi was inscribed on the UNESCO World Heritage Sites list in 2016. 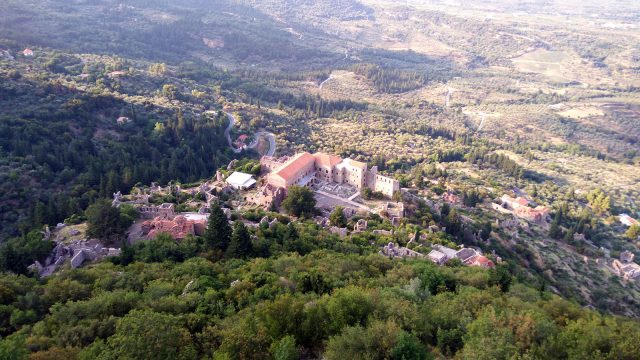 The temple of Apollo Epicurius is located at an altitude of 1131 meters above sea level,
Do you like it?
Read more

The sanctuary of Epidaurus is located on a plain in the Argolid peninsula.
Do you like it?
Read more
Load more