Ancient Olympia was one of the most famous pan-Hellenic sanctuaries and the seat of the most important games of ancient Greece. Throughout its history, it was within the territory and under the control of the city-state of Elis, the urban center of which was located about 35 kilometers northwest. The sanctuary was built on a plain, at the confluence of the rivers Alpheios and Kladeos, next to the Hill of Kronos. It was dedicated to Zeus and the place name seems to have originally been an adjective that accompanied the word earth or country (Olympian earth or Olympian country). It is also possible that the name derives from the temple of Hera built in the 7th century BC (Olympian goddess), the oldest temple that can be traced archaeologically until now.

In the last phase of its prosperity during the Roman period, the sanctuary covered an area of ​​about 350 thousand square meters and consisted of about 30 public buildings and facilities, built in various phases from Archaic to Roman times. The most important of these buildings were the temple of Hera, the temple of Zeus with its ivory statue created by the famous Athenian sculptor of the 5th century BC, Pheidias, the altar of Zeus, the Pelopeion, that is, a structure which surrounded the supposed tomb of Pelops, legendary king of the Peloponnese and according to a mythical tradition the founder of the Olympic Games, the Prytaneion, the Bouleuterion and the Metroon, the Philippeion (circular building built by Philip II of Macedonia, in which he placed statues of his family, including that of his son Alexander), the gymnasium and the palaestra, the Leonidaion (a luxury hotel for elite guests), the thesauroi (treasuries), i.e. small temple-shaped buildings of the Greek city-states that housed their precious votive offerings in the sanctuary, the majestic nymphaeum built in the Roman period by Herodes Atticus, and the stadium and hippodrome, venues where the games took place.

Although Olympia became world famous for its sanctuary and pan-Hellenic games, the initial use of the site was not athletic. In prehistoric times, a settlement developed on the site, which flourished during the Late Mycenaean period (13th-12th century BC). The change of the site from residential to religious occurred after the decline of this settlement and the fall of the Mycenaean civilization, around 1000 BC. It is from this period that the first signs of religious activity in the area are dated. The impetus for the building of the first sanctuary was apparently a prehistoric circular mound located at the point where later (in Classical times) the Pelopeion was established. This first sanctuary was small and in the open-air. Apart from the tomb mentioned, the only other “construction” that existed on the site was a tall pile of earth and ashes, which was gradually formed as a result of the sacrifices and rituals performed there in honor of Zeus. The mound and the pile of ashes were located in the middle of a grove surrounded by a fence. This ancient core of the sanctuary was named (and the name persisted until the end of the history of the area) Altis, a word which attributes the grove to the Eleian dialect.

Gradually, from the early 9th century BC onward, the sanctuary of Olympia became known throughout the Peloponnese and central Greece, while the historic event of joining the rituals of sports games occurred in the 8th century BC. This happened either in the context of the cult of Pelops that appeared in Olympia in the 8th century BC, a phenomenon that followed the Mycenaean tradition of heroism in which the organization of sport activities was customary, or as a result of military exercises to prepare the hoplites, who had become regular due to the hostility between the newly formed city-states all over Greece at the end of the 8th and the beginning of the 7th century BC.

Regardless of the reasons for the historical starting point of the games, which are not entirely clear, the fact is that during the 7th and 6th centuries BC Olympia experienced great growth. At that time, the first stadium east of the altar of Zeus was built, the hippodrome, the temple of Hera, as well as most of the treasuries and the bouleuterion. However, the prosperity of the sanctuary came in the Classical period (5th – 4th century BC). The development of all city-states and the national pride of all Greeks, as a result of the victories in the Persian wars, left its mark on Olympia. Most of the buildings of the sanctuary were built then (e.g., temple of Zeus, Prytaneion, Metroon, Pelopeion, Leonidion), while the votive offerings of the period are mainly representative of the pan-Hellenic and individual war successes. Indicative of the gradual expansion of the radiance of Olympia and the development of the sanctuary from the archaic to the classical time, is the gradual removal of the stadium east of the cult area in order to create sufficient space for the foundation of new buildings in the Altis and for the construction of a larger stadium that met the needs of an increasing number of spectators. A total of three stadia were built, with the newest, built in the 4th century BC, accommodating 40-45,000 spectators.

During the Hellenistic period (3rd-1st century BC), the successors of Alexander the Great in the eastern kingdoms offered a boost to the development of Olympia and tried in this way to strengthen their ties with metropolitan Greece. During these times, the building development continued mainly outside Altis (gymnasium, palaestra), while during the Roman period the Roman emperors financed the renovation of old buildings (temple of Zeus, Echo stoa). During this period, many large bath complexes and hotels were built, as well as the nymphaeum of Herodes Atticus. The Romans respected and took an interest in the sanctuary and followed the tradition, giving the site luxurious offerings. In the 1st century BC, the son-in-law of Octavian Augustus, Marcus Vipsanius Agrippa, visited Olympia, while in 67 AD Nero participated in the 211th Olympiad.

The Roman era was the last period of prosperity for Olympia. In the 3rd c. AD, the Heruli, a Germanic tribe that invaded the territory of the Roman Empire, invaded Greece in 267 AD and looted Athens. Although the attack of the Heruli on Olympia is not documented, their descent seems to have alarmed the inhabitants of the area, who at the end of the century constructed a makeshift wall that included the temple of Zeus and the bouleuterion, covering an area of ​​about 10,000 square meters. Despite the upheavals, the sanctuary continued to function and the games were held as late as the 4th century. The exact date of their cessation is not known, but it is more likely that this happened at the beginning of the 5th century AD. After this time, Olympia returned to the form it had in the prehistoric period: its cult character ceased while life continued. A prosperous settlement developed in the area that was engaged in agricultural activities. Indicative of the radical change that occurred in the area is the construction of a Christian church opposite the temple of Zeus, built on the walls of the so-called workshop of Pheidias.

This settlement was abandoned in the 7th century AD, perhaps due to the many earthquakes that struck the Peloponnese in the middle of the century and the pandemic that affected the entire territory of the early Byzantine Empire during the reign of Justinian. The site has not been inhabited since, and ancient Olympia was gradually covered by layers of mud from the floods of the rivers Alpheios and Kladeos. Indeed, the first excavations carried out at the site in the 19th century revealed the antiquities in deep sediment embankments that reached 4-8 meters.

It seems that river overflows were a constant problem for Olympia. Flood protection dams on riverbeds have been found dating since the Mycenaean period, which were repaired (or supplemented by new interventions) systematically in later times. After the human abandonment of the area, these works were eroded, leaving the site at the mercy of the rivers. It is notable that a change in the course of the Kladeos river inside the sanctuary disappeared the western part of the Hellenistic gymnasium, while the Alpheios river is responsible for the disappearance of all material remains of the hippodrome.

Despite the damage caused to the archeological site by river overflows, recent research suggests that the definitive abandonment of the site and its disappearance under tons of mud is not due to the rivers, but to successive tidal waves (tsunamis) which affected the western Peloponnese in the 6th c. AD. According to these investigations, the rivers Alpheios and Kladeos did not have the potential to cause such destruction to the area. In contrast, mollusks, gastropods, and other microorganisms (e.g., foraminifera), found in abundance in the sediment that covered Olympia, is of marine origin, which proves that these alluviums were transported by sea. In support of this scenario is the fact that during the excavations in the temple of Zeus, the columns of the monument were not found fallen in the same direction as one would expect after a collapse due to an earthquake but were found “swimming” inside the sediment in various directions. According to more recent research, the large amount of sediment carried by the tidal waves blocked the rivers and changed their course to the sanctuary, causing further flooding.

For the recent research regarding the destruction of Olympia: Universität Mainz. “Olympia hypothesis: Tsunamis buried the cult site on the Peloponnese.” www.sciencedaily.com/releases/2011/07/110710204240.htm,

Archaeological Site of Delos
Delos is perhaps the only island in the Mediterranean which, despite its very small size (3.4 km2), was very important in antiquity. It was a leading […]

Archaeological Site of Delphi
The archeological site of Delphi was a sanctuary of Apollo and the most important oracle of the ancient Greek world. According to ancient tradition, the god […]

Archaeological Site of Mystras
The archeological site of Mystras is located about five kilometers west of Sparta, at the foot of Mt. Taygetos. The history of the site begins after […]

Archaeological Site of Philippi
The archeological site of Philippi is located in a plain between the mountain range of Orvilos in the north, Mt. Paggaion in the southwest and Mt. […]

The sanctuary of Epidaurus is located on a plain in the Argolid peninsula.

The temple of Apollo Epicurius is located at an altitude of 1131 meters above sea level,

The archeological site of Olympia was inscribed on the UNESCO World Heritage Sites list in 1989. 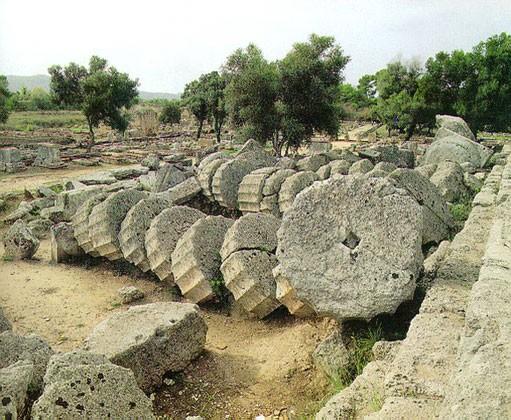